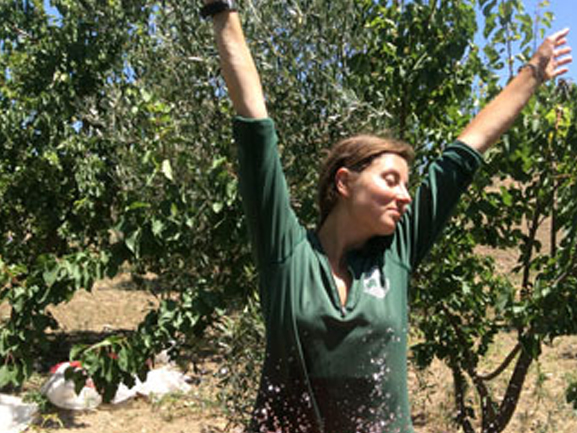 We periodically take advantage of our proximity to Lake Marmara by holding a scenic mangal (bbq) on the platform where fisherman sell their haul. Makes for a great team photo spot, as well!

The summer heat has finally set in at Kaymakçı. Thanks to the weather station on site, we always know exactly how hot it is in the field and, for those brave enough to check, how hot it will get before the day ends. Team members gladly exchange tips for tying headscarves and keeping water bottles cold.

Words for essentials like su (water), gölge (shade), and ruzgar (wind) have become part of everyone’s vocabulary. The winds help with the heat, but the 45 mph gusts present their own problems.

As archaeologists, it is tempting to focus on exotic finds and burned layers that hint at interactions with other sites in the region and highlight the importance of Kaymakçı in the ancient Mediterranean world. But our understanding of the site depends equally on uncovering the daily rhythms of its ancient inhabitants, and our daily battles with the wind and sun encourage us always to think on this smaller scale of individuals.

Since our last paleoethnobotany update, flotation has continued in full force. As the days grow hotter, the flotation tank is the coolest place to be.

In addition to floating the samples, we spend much of our time processing materials that come out of the soil samples. This involves sorting out the pottery, bone, and other things that don’t float in water.

This week the design team has been working on schematic plans for a new research and educational center to house future team members during excavation seasons. Tim Frank and Manny Moss are also looking at this season’s excavation areas and creating 3D models of what’s been found so far. In both projects Tim is studying wind flow patterns and how buildings influence airflow for natural cooling.

We could have used some cooling breezes this week when the temperature reached 104 degrees!! While we are sitting in the old village schoolhouse, the representation team’s office space, it is hard to imagine that local children got much studying done in the still-hot room.

I have been working on refining the conceptual site design for the new research and educational center as the architecture team is refining the building designs. We’ve incorporated team meeting areas and some garden spaces into the plan. Once the soil floatation studies are analyzed and ancient plant species identified, we hope to build a Bronze Age demonstration garden. It will be a nice visual complement to the vegetable garden intended to help feed the team in future years. In the meantime, I’m using more analog means to study the local landscape.

Pottery, or rather fragments of it, are without any exaggeration the most common and numerous find-category on any excavation. And its value is just as manifold. In the first place, it helps us to date the excavated contexts, since fashion was constantly changing even in the Bronze Age, so too did the typology of ceramic vessel shapes. Paying closer attention to the production technology teaches us about a wider-reaching network of contacts and exchange of knowledge. The know-how was just as important (and often treasured) as it is today. Finally, search for imports or new decorative techniques, can reveal potentially far-reaching trade routes.

Going through the freshly excavated lots of pottery, often still wet in the drying sieves, made me soon aware that there seems to be a clear pattern of difference between the various excavation areas. A more thorough look at selected contexts revealed that at least two distinctive ceramic phases can be identified. Their date can be further pin-pointed by drawing parallels from other sites, but since most of them are hundreds of kilometers away, Kaymakçı will certainly become THE yardstick for the definition of ceramic development in Central Western Anatolia.