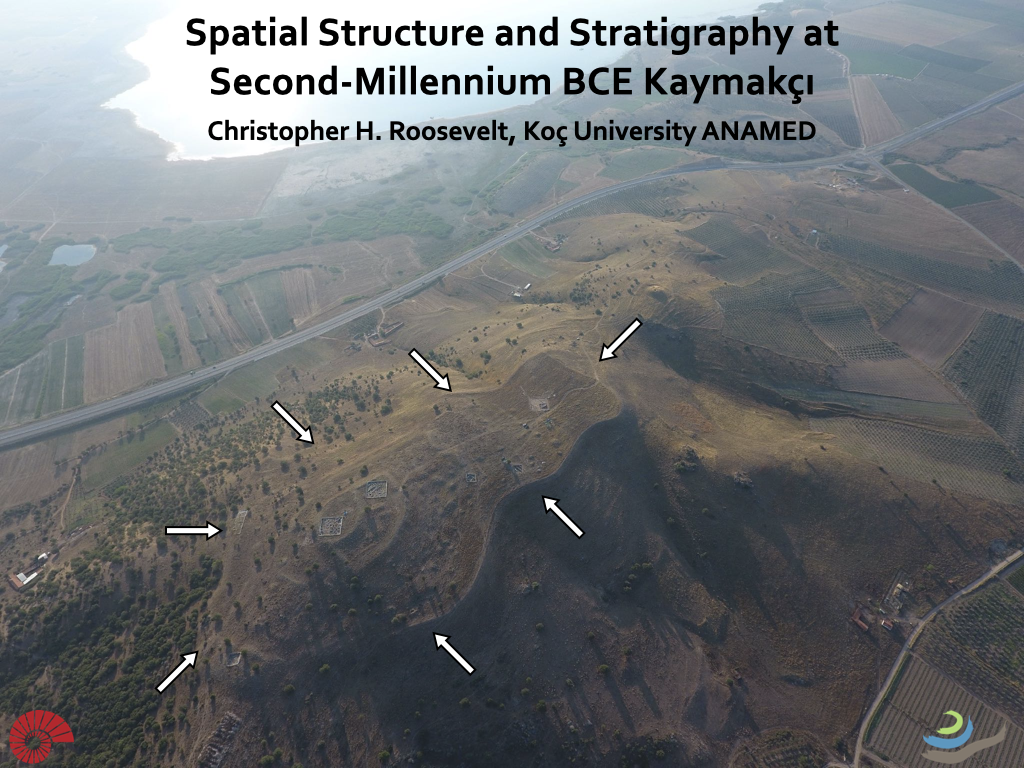 Kaymakçı and the Marmara Lake basin were well represented at the WANAT symposium—Western Anatolia in the Second Millennium BCE: Recent Developments and Future Prospects—a collaboration between three institutions (Koç University’s Research Center for Anatolian Civilizations (ANAMED), Charles University’s Faculty of Arts (Prague), and the Eberhard Karls University of Tübingen) hosted by ANAMED. See below for papers by project members, most of which included material from KAP and CLAS!

Of Types and Elements: A Combined Assessment of Western Anatolian Metallurgical Industries in the Second Millennium BCE

Abstract: The study of ancient metallurgical industries in western Anatolia has focused primarily on the crucial technological, stylistic, and cultural developments characterizing the third millennium BCE across the entire peninsula. The shared vision of a politically fragmented and, somehow, culturally backward region during the second millennium BCE has deeply affected the interpretation of material evidence dating to the Middle Bronze Age (MBA) and Late Bronze Age (LBA) phases. Thus, the analysis of the growing amount of metallurgical data available in the region dating to the second millennium has often been conducted only in terms of affinity to and/or difference from the better known contemporary cultural horizons of the Aegean and central Anatolia.

Through the integration of typological and archaeometric datasets, this paper aims to provide an updated analysis of the current state of knowledge on the developments of MBA and LBA metallurgical industries in western Anatolia. The analysis of new archaeometric data from the second millennium BCE citadel of Kaymakçı in the Middle Gediz river valley is here combined with the overview of collected, typologically sorted, and analyzed published metal items from sites located both in coastal and inland western Anatolia. The comparison with published datasets highlights existing shared patterns and diversified strategies in terms of raw material provenance and trade, technological choices, and stylistic preferences on diachronic and regional levels. Conclusions include a challenge to the idea of a progressive downfall of local metal industries and a highlighting of the combination of external inputs and autonomous innovations that characterize the western Anatolian metallurgical horizons of the MBA and LBA.

Abstract: Animal husbandry congruently adapted to the economic and socio-political transformation of Bronze Age communities to early state societies of the Late Bronze Age. These transformations are tracked in early writings and in the zooarchaeological record from administrative centers in Mycenaean Greece and Hittite Anatolia. The centralization and intensification of animal economy ensured animal products to feed the working population, supply military forces, and provision for palatial and ceremonial uses. Palatial centers kept large flocks of sheep and goats for wool and meat production, and cattle were valuable property for agricultural labor and prestige. Pig husbandry varied across centers and regions in Greece and Anatolia, but even in Hittite Anatolia small-scale pig husbandry provided food and lard.Our recent understanding of animal economies in wider LBA Anatolia and Greece has been largely dependent on the zooarchaeological data from large Hittite and Mycenaean centers. Systematic collection and analysis of faunal remains found at ongoing archaeological excavations in western Anatolia currently allow us to investigate basic subsistence and systems of economic and socio-political organization in this region. Based on faunal data from Kaymakçı, Troy, Clazomenae, and Beycesultan, we discuss western Anatolian patterns of animal husbandry. We compare the relative importance of the main food taxa (sheep, goat, cattle, and pigs) versus wild food resources, and detail husbandry strategies based on mortality and biometry data. We conclude by suggesting discussion foci that we feel are essential in future zooarchaeological studies in western Anatolia, namely connectivity, scale, ecology, and cultural influences.

Abstract: When experts complain that western Anatolia lies in the shadow of its more famous neighbors, the most neglected member of the family is always local pottery. The little attention given to pottery anyway almost always concerns Mycenaean and other painted wares.

This paper looks at broader patterns recognizable in western Anatolian Middle and Late Bronze Age pottery traditions and how they match (or do not match) what we see in neighboring regions. Covering functional and technological but also aesthetic aspects, we approach the pottery repertoire as seen from within and from outside.

Based on first-hand knowledge of pottery from Troy, the Bakırçay Valley, Kaymakçı, and Bademgediği Tepe, we convey a structured view of western Anatolian pottery, targeting the distributions of various wares, surface treatments, and decorative elements across this large area. We try to make clear how the region could have been structured in different ways, depending on which aspects one stresses. In terms of shapes, we look at general functional categories such as table wares to compare habits between western Anatolia and its neighbors to the east and the west. Where possible, we address also changes throughout the millennium.

As pars pro toto, we use Anatolian Gray Ware and Gold Wash Ware as two case studies. Even though large areas of western Anatolia are known only from surface materials recovered during surveys, we aim to offer a holistic picture of the area, reflecting the state of knowledge in the year 2020.

Western Anatolia and its Neighbors: Communication and Exchange during the Late Bronze Age

Abstract: Growing archaeological and textual evidence portray the picture of Late Bronze Age western Anatolia as a cultural landscape dominated by strong polities, such as Arzawa, Mira, or the Seha River Land, which conducted ambitious domestic and external policies. Such development must have been based on a strong economic system, and exchange was surely one of its most important components. Evidence coming from older and recent western Anatolian excavations demonstrate exchange relations with the Aegean, central Anatolia, but also more distant areas in the Levant. Especially the finds coming from the sites located on the Aegean coast, such as Miletus, Bakla Tepe, Panaztepe, Beşik-Tepe, or Troy, show that the role of this area in the Late Bronze Age regional and interregional exchange networks was underestimated in the previous research. This point refers both to the maritime routes along the coast as well as to the land routes connecting the Aegean and inner Anatolia.

Some of the western Anatolian sites were centers of production and were considerable “consumers” of foreign goods, while others may have played the role of an important intermediary at the regional or interregional level. The evidence includes not only personal adornments such as carnelian, glass, faience jewelry, or foreign pottery, but also various kinds of weapons, seals, and other objects. This presentation not only addresses the question of what kind of objects were transported and exchanged, but also how trans-interregional communication might have worked, which maritime routes could have been used, and who might have stood behind it—thus asking who acted as sponsors and organizers and who as agents of the enterprise.

Abstract: The ridgetop remains of Kaymakçı in the Marmara Lake basin of the Gediz River valley provide one of the fullest exposures available of the spatial structure of a second-millennium BCE citadel in western Anatolia. With the exception of extensively excavated sites such as Seyitömer, no other site in the area has provided so full a picture of spatial structure, even before excavations began. Thanks both to the abandonment of Kaymakçı after its primary period of use and to its exposed location that allows only minimal sediment accumulation, second-millennium BCE remains are preserved at or near the surface, readily detectable by non-invasive approaches (e.g., microtopography and geophysics). Only with excavation, however, has it become possible to assess the stratigraphy and dating of near-surface remains, showing unsurprisingly that they are a palimpsest of Kaymakçı’s second-millennium BCE occupation history. Natural erosion associated with the exposed location together with anthropogenic degradation from recent plow-zone perturbations have resulted in non-uniform preservation of the latest Late Bronze Age features of the site, preserved in some places and eroded elsewhere. With reference to the spatial structures of nearby sites known only from surface explorations, this paper juxtaposes Kaymakçı’s spatial structure with stratigraphic evidence to discuss what parts of the site have been most degraded as well as the dating and development of its best preserved areas.

Abstract: Archaeobotanical analysis from Late Bronze Age Kaymakçı, a citadel site in western Anatolia, provides new insights into the agricultural patterns and practices of this understudied region. The citadel’s size, location, and close proximity to several contemporary citadels demonstrate its importance and point to the potential of a larger network of interaction between these different citadels. Preliminary analysis of the stable carbon (δ13C) isotopes of barley (Hordeum vulgare) and free-threshing wheat (Triticum aestivum/durum) grains from Kaymakçı provides new insights about the agricultural practices of the citadel’s inhabitants.

Archaeobotanical analyses at Kaymakçı thus far have revealed that barley (Hordeum vulgare), free-threshing wheat (Triticum aestivum/durum), bitter vetch (Vicia ervilia), chickpea (Cicer arietinum), and grape (Vitis vinifera) are the major crops at the site. Complementary to the current archaeobotanical data, stable carbon isotopes of the barley and free-threshing wheat of the site aid in understanding possible use of intensification practices of plant cultivation, which include irrigation or seasonal lakeside inundation. Though preliminary, stable isotope analysis of the cereal remains from Kaymakçı offer new data for reconstructing agricultural practices not only for the citadel but also for western Anatolia as a region.