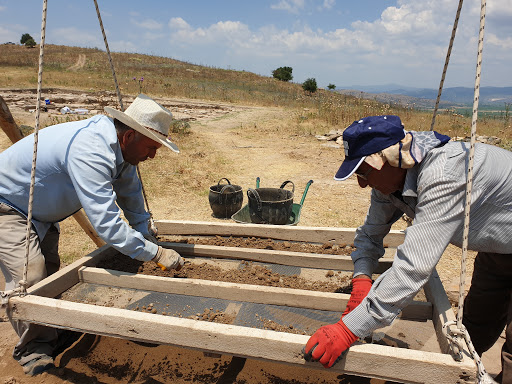 When you spend every morning in a trench for two months, somehow that trench becomes your home, as much as your team becomes your family. The 2019 field season is my second year in a row as the area supervisor in area 109.523, and it’s the second and third season for other people on our team as well!

This not only creates a better atmosphere among team members, it also greatly enhances the outcome of our daily work in the field because each one of us is already familiar with the area and the materials that had been and are being excavated.

The area we are currently working in is located in the so-called Southern Terrace, located outside the Inner Citadel but within the larger outer line of fortification walls that encircled the entire settlement during the Late Bronze Age.

While the general layout of this part of the settlement was already known thanks to geophysical  survey conducted between 2012 and 2016, the excavations (beginning in 2014) provided a great opportunity to understand and reconstruct the nature of domestic occupation and to grasp the essence of daily life of people living at the site during the 15th, 14th, and 13th centuries BCE.

In a nutshell, we are literally sticking our nose inside other people’s houses! The work in area 109.523, in fact, focuses on the investigation of long rectilinear buildings separated by alleys or corridors and aligned perpendicular to a street that connected this part of the settlement to the Inner Citadel. The main contexts we have been exploring in these first two weeks are two of these domestic units, internally divided into different rooms by small walls. How were people using these spaces in their daily lives? This is what small but crucial details try to tell us, from the differences in the texture and color of the soil to the distribution of ceramic sherds, bones, and other artifacts.

And so day by day, paying attention to details, we get a perhaps more complex but better picture of daily life at Kaymakçı, from the way people prepared and stored their food to other daily activities conducted within the domestic units and in abutting corridors and alleys. In the next weeks we will continue our exploration of other parts of area 109 to add more pieces to the puzzle! In the meantime, you can learn more about this area, as well as other parts of the site, by reading a recent article published by our team.