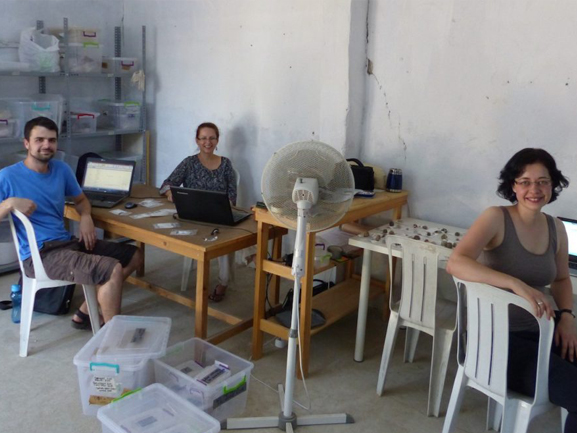 The small finds team has grown in 2017, with Magda Pieniążek getting support from students Maria Lill and Milos Roháček. The small finds team deals with a variety of manmade objects from diverse materials ranging from metal, clay, faience, and stone to bones. Even though they are called ‘small finds,’ some of the objects (like grinding stones) are quite big; one weighing as much as 2 kg!

The focus this season was primarily on textile tools, such as spindle whorls and loom weights, and metal objects, such as knives, needles, and awls. All these objects bring us closer to the people that lived and worked in Bronze Age Kaymakçı.

Over quite a few days Maria dealt with the 120 spindle whorls found at the site so far, working with them throughout the day (and night, as they even appeared in her dreams!). Spindle whorls were used on spindle spikes as weights to increase and maintain the speed of spinning. The spindle whorls in Kaymakçı were made of clay and come in various shapes: conical, biconical, and spherical. They also differ considerably in weight. Their appearance on the site tells us about people spinning yarn of varying quality for different kinds of textiles.

Many of them were decorated with notches or impressions. We admired the creativity of those living in Kaymakçı and held a spindle whorl beauty contest. Here is the winner: an elegant biconical example!

Magda and Milos concentrated on the metal finds such as pins, chisels, knives, drills, and awls. Bronze Age awls could have been used for fine levering or prying work, carving, or perforating objects made of wood, leather, bone, horn, or even stone. The awls found at Kaymakçı so far are small, 5 cm on average, so they must have been used for very fine craftsmanship. Some of them could be used as drills for perforating very small objects such as beads – one was only about two millimetres thick.