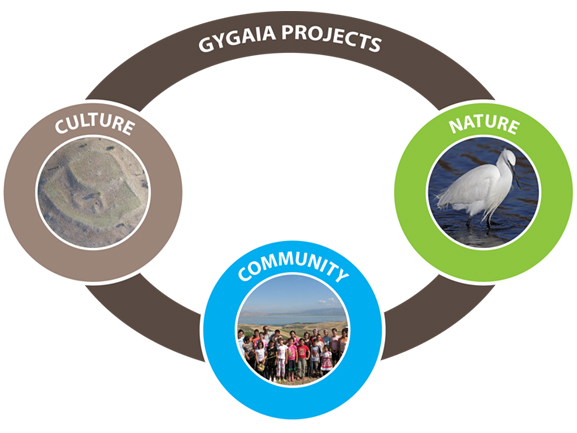 Gygaia Projects Presentations at the SAA meetings in San Francisco

I recently traveled to San Francisco to represent Gygaia Projects at the 80th Annual Meeting of the Society for American Archaeology. This year’s meeting attracted more than 5,000 archaeologists – the largest turnout in the Society’s history. The lobby of the conference hotel was a sight to behold; I’ve never before seen so many people in one room wearing hiking boots with suits.

On the second day of the conference, I presented a poster on behalf of myself and coauthors Christina Luke and Christopher Roosevelt at the symposium “The Robustness and Vulnerability of Food Production and Social Change: An evaluation of interdisciplinary concepts using archaeological data, models and ethnographic observations”. This session brought together researchers from several methodological backgrounds, each of whom used food production as a framework for thinking about how past societies interacted with their environments.

Our poster – “Extreme weather events and 10,000 years of land-use change in the Gediz River valley” – arose from recent efforts to understand how the ancient inhabitants of the Gediz River valley adapted to the risks of extreme weather. We used data from a state-of-the-art paleoclimate simulation to estimate how frequently droughts and floods would have hit the valley over the past 10,000 years. Drawing on concepts from game theory, we then explored how the risks of extreme weather might have influenced an ancient farmer’s choice of which crops to plant from one year to the next. We compared our models to data from the Central Lydia Archaeological Survey and related Gygaia Projects initiatives. We found that the impacts of extreme weather are contingent on the vulnerabilities of each particular society, and that very often what farmers might think to be the best option for minimizing risks in the short term makes them more vulnerable in the long term. Discussing these findings with our colleagues in San Francisco led to several new hypotheses that we look forward to begin testing upon our return to Kaymakçı in the weeks to come.