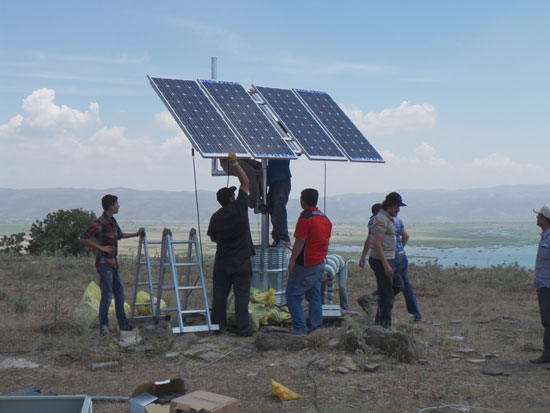 This post begins our series of Voices from the Field, a means of disseminating news about the activities of Gygaia Projects in a popular format. Work so far this year has included geophysical survey under the Central Lydia Archaeological Survey and a host of activities relating to the Kaymakçı Archaeological Project. For Voices from the Field, we’ve asked project participants to write up brief photo-reports based on talks with and visits to the various areas of activity that make up our research program. This week’s post comes from the directors and their leadership teams.

As in past years, we’re based in the small community of Tekelioğlu. During this summer season, we make up 10% (30 people) of the population (300 people). Team members are set up in various rental houses with our base of operations at a central location that includes two laboratories (a “dirty” lab for conservation and environmental archaeology and a ceramic processing area) and a studio for architectural study, spatial modeling, and GIS research. We are at capacity and looking forward to the construction of a research and educational center – plans for which are underway!

Our cooks are once again making our work easier. Bread is baked on-site in earthen ovens and eggs – as well as lettuce and other produce – are fresh from the farm. As always, the olives and extra virgin olive oil from the surrounding fields are favorites.

With the inception of excavation at Kaymakçı, the project has established an integrated recording solution that processes laser-scanning and photogrammetric point-cloud data into rendered digital models in near-real time to increase the efficiency of archaeological field recording. Needed for this system was a robust wireless connection between excavation site and labs and the electricity to power it. The implementation of this system, which we call “GygaiaNet” has included the installation of a Point-to-Point wireless system and a photovoltaic (PV) system to power it.

The signal is beamed from an antenna on the third floor of our home base in Tekelioğlu over 6 km to Kaymakçı.

A team from Salihli installed the PV system.

The wireless-PV mast is anchored with guy wires to buffer against strong winds. From this central point, electric and fiber-optic cables carry the signal in three directions (visible to left and right along the ground) to wireless access points near each excavation area.

The system will be complete once we install a local weather station (to see just how strong local winds are!) and a wireless security camera to help monitor the protection of the site.

As we excavate each context on Kaymakçı, large quantities of the material remains of Bronze Age culture are uncovered.  We find objects of everyday use such as ceramic bowls or animal bones, as well as the occasional special object made out of metal, stone, or other materials.  As we collect these, they become “samples”, which are brought to our Tekelioğlu base of operation.  Here, we sort them by type, photograph them and record important analytical data into our centralized database.  We have also begun to use a portable desktop laser scanner to create digital 3d models of some of the objects so they can be studied from anywhere in the world.  By collecting all of these data about the objects used in the past, we are able to understand how people lived thousands of years ago.

Electrical resistance survey continued at Kaymakçı in preparation for the excavation season.

Electrical resistance survey is conducted by inserting mobile and remote probes into the ground at regular intervals and measuring the resistance of the completed circuit using specialised equipment. The data thus collected is processed into an image of the buried archaeological features (upper left corner).

Although most of the processing is typically done in the lab, data can be checked in the field when necessary.

Good ground moisture is preferred for electrical resistance, but dryer and harder soils can still be surveyed, albeit with increased difficulty.

During the first week of the KAP excavation season, conservation team members organized the new lab space, as well as prepared micro-chemical material characterization tests and mixed adhesives for use during the excavation season. Experimental mortar and grout mixtures, exposed to the elements since the end of the 2013 field season, were assessed by team members for condition, durability and weathering properties. The majority were in very good condition and selected recipes will be adopted for use with mudbrick and stone masonry on site.

During the first week of the 2014 season, despite unseasonably cold and rainy weather, the environmental archaeology team set up our laboratory facilities, arranged for the construction of a new flotation tank, and scavenged the village for animal bones to begin to build a comparative collection. Flotation is the process by which ancient plant remains are separated from archaeological soils and requires a water source, pump, and tank for cleaning the soil and collecting the plant remains (mainly seeds). In order to identify animal bones from archaeological sites we compare fragments of bone found during excavation to skeletons of animals that lived near the site—a comparative collection—which we assemble from modern animal bones in the area today, burying them carefully to remove any remaining soft tissue through natural decay.